a solitary wolf culled from the pack

through her undulate terrain.

She welcomed the seduction

Beguiled by his seeming intimacy

she failed to assimilate the slow infestation

of his oblique aural patternings

It was her stomach at first that resisted the enchantment

with small flutterings of continual distress.

that his words were predictable

They dangled from her

from her now weary ears

So she gathered herself

and his errant words,

Though at times she could still hear their echoing…

The scent of him having so easily

To ward off this sonic residue

she bathed daily in lovage root and vervain

and made a tincture of his words,

She took one dose timed exactly

as the cusp of the horizon split day into night

Three drops under her tongue,

I had fun with this one. Looking over older work I saw a story weaving between a few different poems and so I threaded a needle and sewed them together. The drawing is an old one too. Newer than the poems, it is cut from the same cloth. 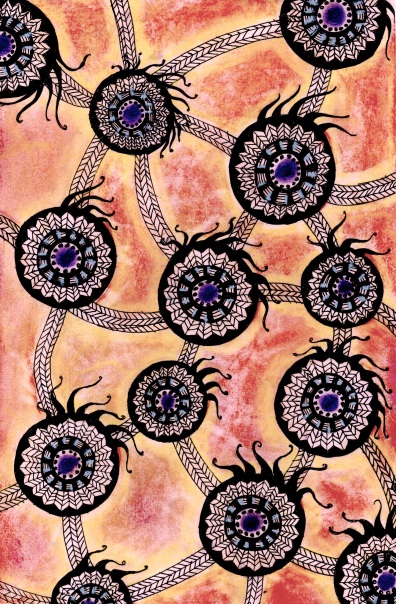 I envisioned the extension

as I gaze into the unknown